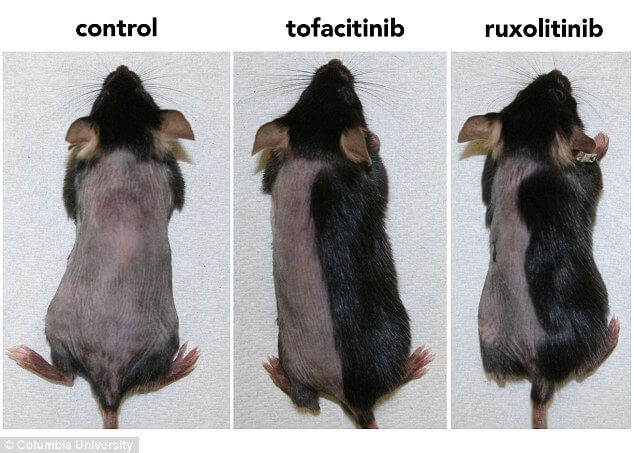 Photo Above: The drugs work by inhibiting a family of enzymes inside hair follicles that are suspended in a resting state, effectively ‘waking’ the hair.  Within 3 weeks, mice that received topical ruxolitinib or tofacitinib had regrown nearly all their hair (right photo; drug was applied only to the right side of the mouse). Little to no hair growth occurred in control mice during the same timeframe (left photo).

In experiments with mouse and human hair follicles, Angela Christiano of Columbia University Medical Center, found that drugs that inhibit the Janus kinase (JAK) family of enzymes promote rapid and robust hair growth when applied to the skin.

‘What we’ve found is promising, though we haven’t yet shown it’s a cure for pattern baldness,’ said Dr. Christiano.

‘More work needs to be done to test if JAK inhibitors can induce hair growth in humans using formulations specially made for the scalp.’

The research, published today in the online edition of Science Advances, raises the possibility that JAK inhibitors could be used to restore hair growth in forms of hair loss induced by male pattern baldness, and other types of hair loss that occur when hair follicles are trapped in a resting state.

Two JAK inhibitors have been approved by the U.S. Food and Drug Administration.

One is approved for treatment of blood diseases (ruxolitinib) and the other for rheumatoid arthritis (tofacitinib).

Both are being tested in clinical trials for the treatment of plaque psoriasis and alopecia areata, an autoimmune disease that causes hair loss.