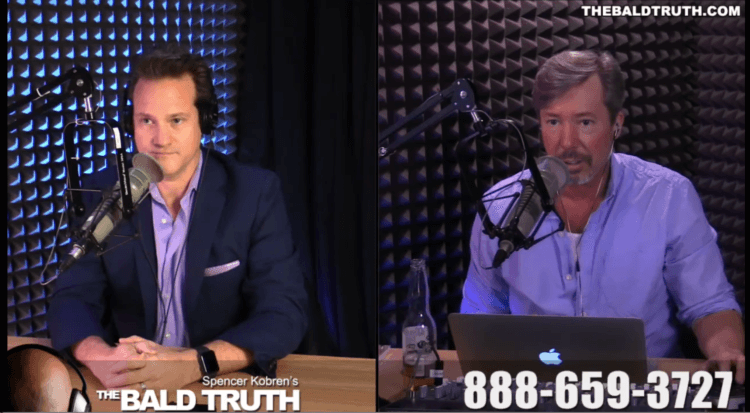 This is the recording from Dr. Alan J. Bauman’s IN-STUDIO appearance in Beverly Hills on Spencer Kobren’s ‘The Bald Truth’ which aired live on April 2, 2018 in which he discusses modern methods of treating hair loss such as low level laser therapy, compounded minoxidil 82M, topical finasteride 82F, FUE hair transplantation and much more.  The full segment was nearly three hours, and the phones were “lit up” with callers from across the globe to ask questions during the show.

About The Bald Truth

Kobren’s weekly on air support group was nationally syndicated from WestwoodOne Radio Networks for over 12 years on flagship stations like WNEW (NYC), KLSX(Los Angeles) and WJFK(Washington D.C). In 2007 TBT moved to XM Satellite radio, but in 2009 chose to break away from conventional broadcasting in order to accommodate the need for a more interactive online experience for his listeners.

The Washington Post proclaims that The Bald Truth is Kobren’s “Pulpit of the airwaves.” A new genre of hip talk radio.

New York Post columnist and author, Girsh Kuntzman, writes, “The tone of The Bald Truth is pure therapy,” and the Pittsburgh Tribune-Review declares “Spencer Kobren’s nationally syndicated show “The Bald Truth” has a dedicated listenership that would have Rush Limbaugh pulling his hair out in envy.”

For more than 19 years Kobren, has been advising listeners on issues ranging from building self confidence and creating sexual attraction to overcoming one of life’s most dreaded physical curveballs, the modern man’s Achilles’ heel, male pattern baldness. The Bald Truth has developed cult-like status among men ages 18 to 35 and beyond seeking advice on “Sex, Life and TheBaldTruth.com