THE NEW YORK TIMES
“A Hair Transplant Meant to Be Noticeable“
By GERIT QUEALY
Published: December 7, 2006 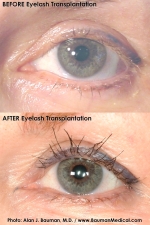 FOR those who want an irreversible solution than extensions, eyelash transplants are the latest crossover from reconstructive to cosmetic surgery.
Dr. Marcelo Gandelman, a plastic surgeon in São Paulo, Brazil, began experimenting with the technique in 1967 during a residency in a burn unit. Over the years he has modified and simplified the technique, teaching at conferences of the International Society of Hair Restoration Surgery.
His former pupil Dr. Jennifer Martinick of Australia has revised the technique. Like him, she takes hair from the back of the scalp to implant into the eyelid, but her technique allows the implantation of multiple hairs at once, on both upper and lower lids, with more control over the direction the hair grows.
Dr. Alan Bauman of Boca Raton, Fla., who performs the procedure, said he charges $3,000 a lid, which includes two nights in a hotel. Once safely transplanted, the hair grows. And grows. And grows. Dr. Bauman said interest in the procedure from patients and physicians “has exploded in the past four to six months,” but he has found himself suggesting to makeup artists that beauty schools offer training in the maintenance of implanted lashes.
“I don’t want these patients going home and playing around with scissors near their eyeball,” he said.
The intensive upkeep is one reason Dr. Gandelman and Dr. Martinick limit the procedure mostly to trauma patients and those with trichotillomania (the compulsion to pull out one’s hair on the face or head). “You’ve got to be really motivated, “ Dr. Martinick said. “What happens if a 25-year-old has the procedure, then when she’s 45 with three children and her priorities change, she doesn’t want them anymore?”
Dr. Gandelman said he worries that body dysmorphics would be particularly attracted to lash implants. “They use mascara, then extensions,” he said. Then, “they come in with a beauty magazine saying this is real beauty.”
“But that is mainly Dr. Photoshop,” he said. “He’s the best doctor in the world.” GERIT QUEALY
— READ MORE —