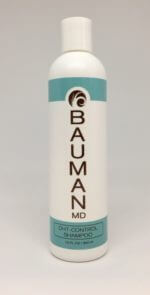 Any adult at risk for or experiencing hereditary hair loss and thinning hair should use BaumanMD DHT-Control Shampoo for thicker, fuller, healthier-looking hair.

BaumanMD DHT-Control Shampoo has been designed to be a frequent-use shampoo. For best results use a generous amount to produce a lather and massage vigorously into scalp. Leave on hair and scalp for two to five minutes before rinsing. Always follow with BaumanMD Therapeutic Anti-DHT Conditioner. 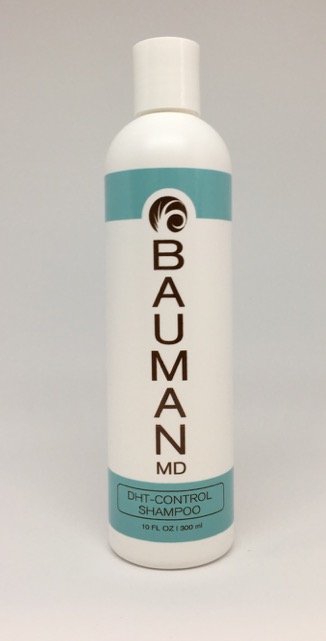 What kind of results can I expect when using BaumanMD DHT-Control Shampoo?

The ‘base’ of BaumanMD DHT-Control Shampoo makes the hair look shinier, thicker and fuller, improving the volume and texture of the hair in as little as two weeks*. The other ‘active ingredients’ will continue to improve your hair over the following months. Routine HairCheck measurements can be used track hair growth changes.

BaumanMD DHT-Control Shampoo contains three specific components that have been shown in scientific studies to have an effect on the action of DHT or dihydrotestosterone—a primary trigger for hereditary hair loss.

Yes, this specialty shampoo was designed to be sulfate-free, pH balanced, and color-safe.

Can I use BaumanMD DHT-Control Shampoo with other hair growth treatments?

How long do the effects of BaumanMD DHT-Control Shampoo last?

As with any treatment that improves hair growth or hair volume, continued use is required in order to maintain the results of BaumanMD DHT-Control Shampoo. If discontinued, you will likely lose the benefits within a few months.

Is there a minimum recommended age for BaumanMD DHT-Control Shampoo?

BaumanMD DHT-Control Shampoo has not been evaluated in the pediatric population. It is recommended for adults, 18 years of age and older.

BaumanMD DHT-Control Shampoo contains active natural Anti-DHT ingredients, including Caffeine, Saw Palmetto (Serenoa Serrulata) and a Green Tea derivative called epigallocatechin-3-gallate (EGCG) which in published scientific studies have each been shown to have an effect on DHT, a known trigger for hair loss. The shampoo also contains panthenol, a provitamin of B5, which moisturizes and lubricates hair fibers, improving shine, volume and manageability.

What is HairCheck and how often are HairCheck measurements recommended?

Quick, painless, non-invasive HairCheck measurements are a scientific way to measure hair growth changes and are typically performed every 90 days.

Lademann J, Richter H, Schanzer S, Klenk A, Sterry W, Patzelt A: Analysis of the penetration of a caffeine containing shampoo into the hair follicles by in vivo laser scanning microscopy. Laser Phys 2010;20:551–556.