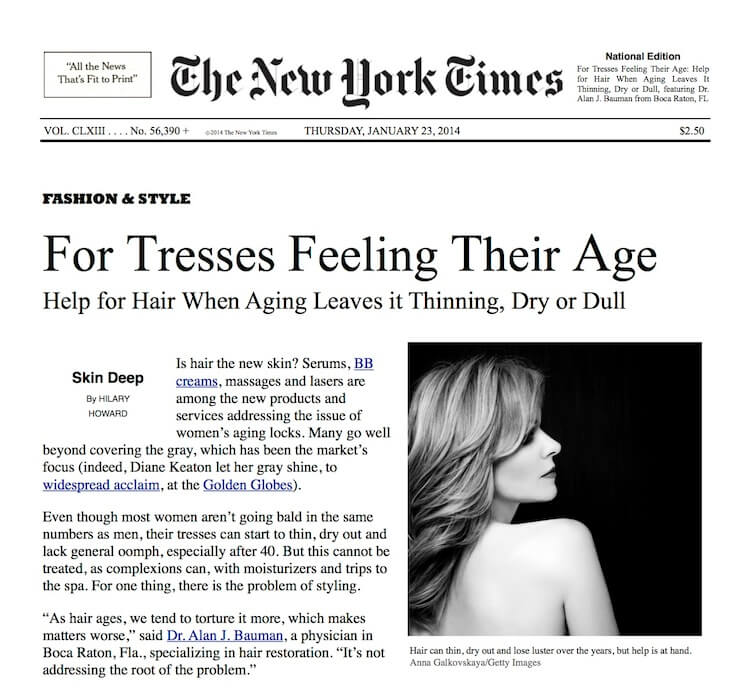 The New York Times – FASHION & STYLE- “For Tresses Feeling Their Age” – Help for Hair When Aging Leaves it Thinning, Dry or Dull By HILARY HOWARD

Is hair the new skin?

Serums, BB creams, massages and lasers are among the new products and services addressing the issue of women’s aging locks. Many go well beyond covering the gray, which has been the market’s focus (indeed, Diane Keaton let her gray shine, to widespread acclaim, at the Golden Globes). Even though most women aren’t going bald in the same numbers as men, their tresses can start to thin, dry out and lack general oomph, especially after 40. But this cannot be treated, as complexions can, with moisturizers and trips to the spa. For one thing, there is the problem of styling. “As hair ages, we tend to torture it more, which makes matters worse,” said Dr. Alan J. Bauman, a physician in Boca Raton, Fla., specializing in hair restoration. “It’s not addressing the root of the problem. “The problem is what encases the actual hair root: the follicle. “The follicle function diminishes with age in proportion to hereditary risk,” Dr. Bauman said. He performs hair transplants as a last resort, when follicles, the organs that grow hair, cannot be resuscitated. But he said he was mostly concerned with keeping follicles alive and healthy. To nourish them, he recommends eating foods rich in omega-3 fatty acids like salmon and ﬂaxseeds, as well as dark green vegetables, which are strong sources of vitamins A and C, needed by the follicles to produce sebum, hair’s natural conditioner. He also encourages eating eggs, beans and poultry. “You need protein for hair,” Dr. Bauman said. “If you’re starving yourself, your hair will suffer.”Dr. Doris Day, a dermatologist in New York, agreed that the right foods are necessary for healthy hair. 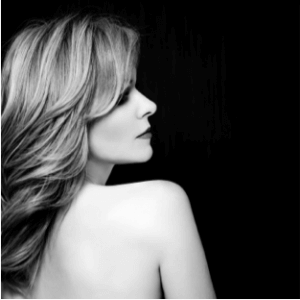 Hair can thin, dry out and lose luster over the years, but help is at hand – Anna Galkovskaya/Getty Images

“I believe that inﬂammation is negative for the hair follicle, that it can accelerate stress shedding and compromise growth,” she said. She suggests eating pomegranate, avocado, pumpkin and olive oil, and herbs like turmeric, mint and rosemary. Hair care also comes in pill form. Biotin has been a go-to for hair and nails for years. The newer Norwegian dietary supplement Viviscal includes biotin and other traditional hair strengtheners like niacin and vitamin C. But its star ingredient is a mysterious ﬁsh-derived protein based on the Inuit diet. Dr. Day said she had seen published medical data on Viviscal and believed that the studies were “well done and reliable.” Dr. Bauman said he had prescribed Viviscal for years to his patients, many of who rave about “shinier, fuller hair and stronger nails.”Dr. Day also endorses the LaserCap, which costs $3,000 and is used 30 minutes a day. Dr. Day described the cap as offering “speciﬁc wavelengths that produce very low heat to stimulate follicle growth,” as opposed to hair removal laser treatments, which deliver stronger amounts of energy, “like a hammer to a nail,” to the base of the follicle, killing it. But the LaserCap is no panacea, Dr. Day said, so she encourages consulting a dermatologist who specializes in hair to explore other options and to manage patient expectations. “The problem with hair loss is that people want to go back to when they had a full head of hair, and for most it’s really a battle to grow back some of it and prevent it from getting worse,” she said. “When patients spend that amount at once on a product, they can’t help but have bigger expectations, and even if it works, they can still be disappointed. “For the laser-averse, she said Rogaine is a “no-brainer.” This over-the-counter product contains minoxidil, which is applied directly to the scalp. Keranique’s new Hair Regrowth Treatment also contains the ingredient. For those with more serious issues, Dr. Bauman recommends prescription-quality minoxidil, which contains more than twice the amount found in Rogaine and Keranique. Called Formula 82M, it’s applied to the scalp twice a day, in droplets along part lines. It costs about $70 a bottle. Platelet-rich plasma injections, famous because of Kim Kardashian’s vampire facial and Rafael Nadal’s knee injury, are also being explored for hair.

The latest products go beyond covering gray hair. Diane Keaton did not hide hers at the Golden Globes. Paul Drinkwater/NBC, via Associated Press

“Platelets tell the body to rejuvenate and repair,” said Dr. Bauman, who said he had seen promising results. Dr. Day is a bit more dubious. “Be careful in knowing your vulnerability and knowing the science behind things,” she said. Though they don’t promise miracles, the new wave of anti-aging products can soothe and moisturize the scalp and strands, if nothing else. “Even though your hair is basically dead once it grows out of your scalp, you can coat it, and if it’s done well, it will be stronger and smoother,” Dr. Day said. She is a fan of the products of Julien Farel, a French-American salon impresario. They feature his A2B technology, a concoction of anti-aging ingredients like hyaluronic acid and resveratrol that he developed in Italy. He is to open Julien Farel Restore Salon & Spa at the Loews Regency on Park Avenue in March. Treatments like Restore and Power Shake, which includes keratin, collagen and a gloss fortiﬁer ($150), will be available. Rachel Zoe’s blowout salon, DreamDry, offers its own deep conditioning alternative, the Kérastase Paris Fusio-Dose instant treatment, which features different boosters with antioxidants, amino acids and moisturizers, depending on the condition being treated. It costs $30, which includes a scalp massage. Massage is also part of the $30 package at the David Ryan Salon in Manhattan, which has offered a keratin conditioning treatment for two and a half years. Customers sip ginger tea and get a hand massage as they sit under a blow dryer while Paul Mitchell’s Awapuhi Wild Ginger Keratriplex treatment seeps into their hair. “I like to make this experience spa-like,” said the owner, Maria Lanza.But Dr. Bauman warned that these hair soaks do not produce long-lasting results. “The hair ﬁber doesn’t self-repair,” he said. “Not to say these products aren’t helpful, but they can’t undo the damage.”Of course, there’s always the option of just chopping hair into a Jean Seberg pixie, as celebrities such as Kristin Chenoweth, Robin Wright and even Pamela Anderson, all over 40, have done recently. That will bring the focus right back to where it arguably belongs: the face.

[A version of this article appears in print on January 23, 2014, on page E3 of the New York edition with the headline: For Tresses Feeling Their Age.]

Alan J. Bauman, M.D. is a full-time board-certiﬁed Hair Transplant Surgeon and Hair Restoration Physician in Boca Raton, Florida. Established in 1997, Bauman Medical Group has been exclusively dedicated to helping men and women medically maintain, enhance and restore their own living and growing hair by providing state-of-the-art hair loss diagnosis, scientiﬁc measurements and the latest, most effective medical treatment options. To date, Dr. Bauman has treated over 15,000 patients and is a frequent faculty member at major international medical conferences. For a private conﬁdential consultation or more information please visit https://www.baumanmedical.com or call 844-Get-Hair toll free. Follow him on Twitter @DrAlanBauman, Facebook and LinkedIn.

Click here to read this newspaper article posted on Scribd.